This is a playable version 0.95a -- look forward to all manner of criticism. There's very little difference between skill levels, but 2 and 3 are much more manageable from a pistol start. 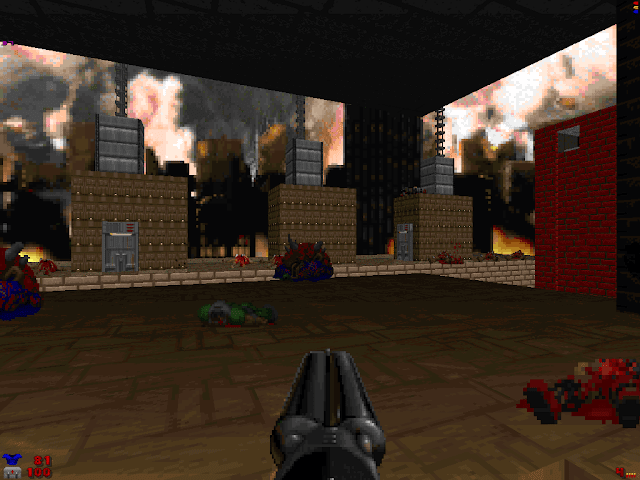 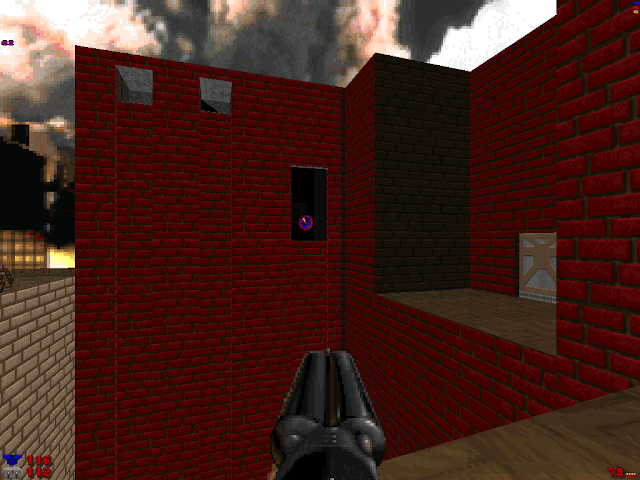 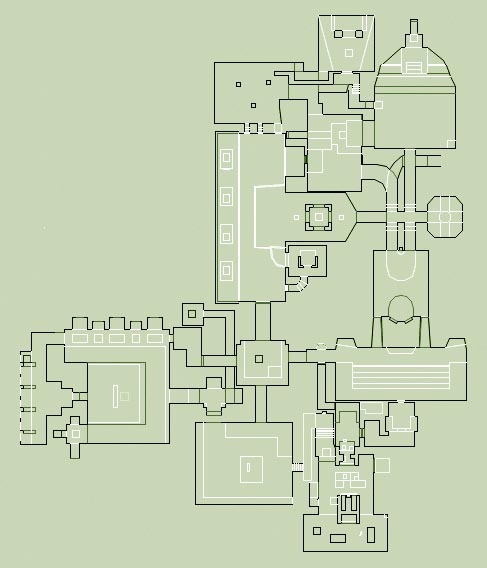 This was the last map I was recommended to check out. TBH I didn't like it much at all. It feels like an E2 map, on steroids, with a load of Doom 2 monsters added in for extra lethality and a distinct lack of health and ammo from a pistol start. I managed to get through it (missing out vast swathes of the secrets), but it took a lot of trial and error, punching things and camping the RL secret near that ledge full of demons in order to get a foothold. After the initial massive resistance is over it's a gigantic map for Doom 2 with a very unintuitive progression.

Visually it doesn't feel right to me either. The exterior section in the top screenshot is more of a PWAD take on a city level and the interior areas are largely E2 style corridors. The texturing near the exit reinforced my E2 thoughts as well.

Sorry, but this definitely doesn't feel right to me.

Don't get me wrong, I really like the secret area.  It just diverges so much from the start that it feels like a different level.  The level is also huge, so I felt a split would be a good fit.  The exit zone feels more detailed, and the architecture is markedly different (though that is very Petersen).

The crate secret with the BFG seems more in line with the early leve,l a giant building with vast height.  If that was the ultimate secret branching from a new exit area, one worked for more challenge there instead of frontloading it, it would carry sufficient cool for the level.

A split would also give a fix for the plasma gun if that's a concern - make it the rocket launcher, with a bunch of ammo in the drop behind it.  It's the most fun for fighting the imps anyways (the BFG makes it too easy).

Aww -- I really like the optional secret area beyond the exit. Adds a lot of oddball mystery to the place, and splitting it off would make it a lot less interesting. I'd suggest swapping the plasma and the BFG, though, and have the BFG be the ultimate reward for the big secret, if you're going that route.

The biggest troubles I see are that the gameplay is a bit too rough. There are just too many enemies -- I like how the pit fight is designed (the idea is to get the secret blue key so you can clear it out safely), but the execution is iffy by the fact that you can't do it at all if you don't locate certain equipment (namely, the rocket launcher) first. It's just brought down by the fact that the level feels open but basically forces you to do things in a certain order (and even find some secrets) because you'll get your ass kicked heavily if you don't.

Still, the style is weird Sandy, the secret networks are awesome, and while there are some texture issues in the brick area (the tunnels opposite the start have some sudden shifts from tan to red), it seems fine to me. This one could definitely be a keeper. ;)

Wonderful map.  I loved the secret back section to the level!  That felt Romero-ish to me, from the complex geometry to the texture choices.  The zigzag over slime really brings it home, it was practically his trademark in DOOM 2.

However, I'd would agree, that it's probably worth a second level.  I don't even think it needs to be moved far - maybe Map 14 and call it "Chemical Plant", which was the vibe I got from it?

As far as the city skyline goes, it was impressive visually but I didn't like how the section played.  I don't even think it's a matter of widening the chasm, it doesn't feel right no matter how many reworks I tried.

I think to get the feel right, the level needs to go up.  Lower the opening vista so the skyscrapers are higher then you, then shift most of the enemies behind you so down is the way to go.  The pressure forces you forward and out, and on the way up you see firsthand the destrution they've wrought.  You'd be fighting your way through the burning alleyways and up to those skyscrapers, which I immediately wanted to do anyhow (I even tried strafe50!).

The streets would start light, some revenants and imps plus chaingunners.  As you work your way up the opposition intensifies.  This would also solve the key problem, since an upward flow would mean some of the keys would need to go higher up in the buildings.

Whatever you do, definitely keep the nonlinear pathways, it was a blast navigating the level!

+ The raised candle before you drop down to get the chainsaw is way to suspicious.  A secret, even one revealed later, would be awesome!

+ The run past the chaingunners before the exit was way too easy.  It's a cool idea, but there's no pressure.  Same idea with the secret mancubus slots after, though those could be fixed just by widening the slots.  When I played they all wandered into the main room, then couldn't fit back inside!

+ The best fights in the level, in order, were: the giant room full of imps, best fought with rockets; the metal hall before the invisibility; and the BFG crate room.

+ Couldn't figure for the life of me how to get to the warp in the brown slime area.

+ The lifts at the start of the hidden computer room had no lower (near the sould sphere, turn around after dropping down).

Okay, I liked most parts of the map, but some of the brick constructs just don't fit at all. I didn't really like the little buildings with antennae and doors, as they look like they could/should be visited at some point.

All the MODWALL areas were great imho, but in the brick-y areas I find some of the texture choices questionable. SPCDOOR on stair-steps looks extremly pwadish to me. I also think you simply used too many different textures. BROWNGRN or SLADWALL mostly didn't fit at all, imo.

The lava on nukage teleport is a sweet touch.

The map far is too difficult from pistol start now.

...and it can be beaten very quickly if the player just drops for the red keycard. Same for yellow card, the whole "path" leading to it can be completely ignored, because it's just on the ground if you drop from the "balcony"

A good map in general, has some unique and recognizable places, which is the most important thing for me... but I'd definitely would like to see it better.

Thanks Alfonzo!  I have to say I basically agree with you entirely.  I was going to mention your issues as caveats in the description of the wad, but I figured I just let people play the map and decide for themselves. In fact, I'm considering reusing parts of the secrets beyond the exit for a separate map, as some of those areas I think are worth keeping.  If so, I'd be happy to switch up the "e2m4" texturing if it's deemed necessary.

I agree at this difficulty it should come later in the episode (map15 maybe? :D :D :D Then at least some of my tangental area could have a purpose *wink wink*, and remain). I could move the plasma rifle to a better location (or remove it altogether).  Of course I have to decide if I want to give up the "reveal" of the city sky which was the whole original concept for the map--to introduce the city burning in dramatic fashion.  In fact, because (for me) the map has such a "the earth has been ransacked by evil and is overrun!" I was thinking of calling the map Hell on Earth, but I guess you already got that name :P.  I'd be willing to let it go as a map12 slot if I could maybe have the secret exit spot. :P

As for the pit where the two arch viles start out, I as thinking of making it a bit wider (I actually already have for the next update).  Also, Essel mentioned textures were made as they were needed.  Well, textures that read "Poison" could be good deterrents from people jumping off the ledge into that pit where certain death awaits (lest you have the invuln).  A skull and cross bones texutre would be more accurate, tho, :p though maybe a bit trite.

I'm so going to play the shit out of this map when I'm home.

Heh, I edited out the chocolate issue within 30 seconds of opening the editor.

This is a fine piece of work you've got here. It's id-iotically non-linear, the texture selection and use is mostly kosher, the gameplay is rampant and chaotic at times...
I think if there's anything bad to say about the map it's that it's too large and complicated. Although much of it could use a bit of trimming, that optional segment past the exit is what really lets the map down, even if it is a very neat idea. While it's commonplace to find areas of a Sandy map that are removed entirely in concept from the rest of the level this particular area with its Shores of Hell texturing feels alien in the most inappropriate way. I would remove basically all of it - except for that blue key switch area and maybe the mancubus segment.

It's also a little too difficult. Having played the map multiple times and taking various different routes (hooray!), the ones most rewarding for the player still leave the map too daunting an obstacle to overcome. The least rewarding routes are simply punishing.

However, even with these things considered and remedied, I think it's a little too much to ask for a map12 slot. I could see it from about map14 onwards (Running From Evil and The Demon's Dead seem to fit the map as well).

This is a magnificent work, and one of the greatest maps submitted so far! While I'm confident that it will make the cut, reducing its size/complexity, difficulty (a little), and perhaps in the long run sorting out some of the less authentic quirks in the alignment and texture department, will finally drive any semblence of a doubt from my mind.